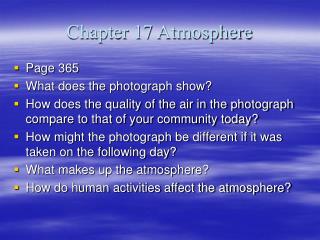 Chapter 17 Atmosphere. Page 365 What does the photograph show? How does the quality of the air in the photograph compare to that of your community today? How might the photograph be different if it was taken on the following day? What makes up the atmosphere?