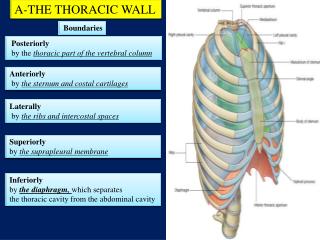 The Thoracic Wall - . surface anatomy : before starting your dissection, inspect and palpate the following surface

Thoracic Wall - . dr. zeenat zaidi. thorax. region of the body between the neck and abdomen flattened in front and

Changes in vessel-wall thickness and vessel-wall area in the thoracic aorta - . yonemura a et al. j am coll cardiol 2005;

THE THORACIC REGION DESCRIPTION: - This is the part of the trunk, which is located between the root of the neck and the

A Watchman on the Wall

Thoracic injury - Introduction. trauma, or injury, is defined as a cellular disruption caused by an exchange with

Thoracic Surgery - . by mike poullis. overview. what is it ? what do you need to know as a nurse on the ward ?. what do