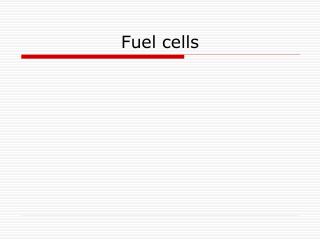 Fuel cells. Fuel cell history. First demonstrated in principle by British Scientist Sir Willliam Robert Grove in 1839. Grove’s invention was based on idea of reverse electrolysis. What is a fuel cell. Creates electricity through electrochemical process Operates like a battery

FUEL CELLS - . alkaline fuel cell(afc). first afc, was a made for a bike by union carbide's karl kordesch. nasa building

Hydrogen Fuel Cells - By: justin hewitt and ian allen. hydrogen fuel cells. outline. what it is how it works history uses

Fuel Cells - . electricity at it’s best. what is a “fuel cell?”. fuel cells and their works. here is when the

Fuel Cells - . with jim and bailey. what are fuel cells?. in its most basic definition,a fuel cell is a device that

Fuel cells - . learning objectives: revise the work covered so far on module 2 of eee. explain that a fuel cell uses the