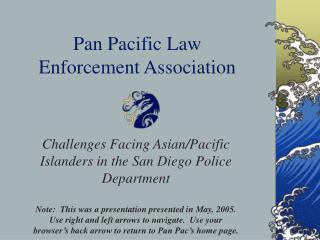 Pan Pacific Law Enforcement Association. Challenges Facing Asian/Pacific Islanders in the San Diego Police Department Note: This was a presentation presented in May, 2005. Use right and left arrows to navigate. Use your browser’s back arrow to return to Pan Pac’s home page. Definitions. ASSOCIATION COVENANT ENFORCEMENT - . using your documents to help maintain your neighborhood. the ground level – your

LAW ENFORCEMENT ETHICS - . means vs ends dilemma. is an approach to ethics that focuses on the rightness or wrongness of

Law Enforcement I - . unit i early law enforcement. who guarded the cave?.