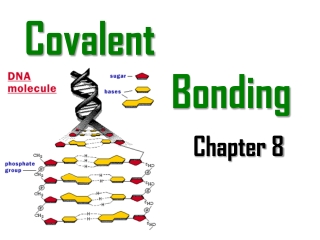 Covalent Bonding. Chapter 8. Introduction. The bonds that hold atoms of molecules together are fundamentally different from those of ionic compounds. The types of atoms that comprise molecules are more limited than ions. Covalent Bonding - . i can write a formula for and name a covalent (molecular) compound. covalent bonds. recently we

Covalent Bonding - . bonding models for methane, ch 4 . models are not reality. each has its own strengths and

COVALENT BONDING - . when one nonmetal shares one or more electrons with an atom of another nonmetal so both atoms end up

Covalent Bonding - . p 104 in text book use full name for first element and add “ ide ” to second (just like you do