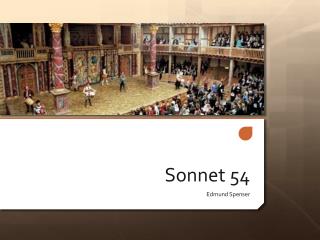 Sonnet 54. Edmund Spenser. A Cambridge graduate (with an M.A.), Spenser lived under Elizabeth I’s rule. He wrote The Faerie Queene in her honor, but it failed to garnish political favor as Spenser held unpopular political views. This remains his most famous work, however. Sonnet - . lesson 1 continued - imagery. sonnet. format of a sonnet: must have 14 lines must follow a regular rhymed

Shakespearean Sonnet , English Sonnet - . the rhyme scheme is abab cdcd efef gg. shall i compare thee to a summer’s

Sonnet - . a short poem with 14, ten-syllable, rhyming lines. written in a strict poetic form, the sonnet was very

Sonnet - . (little song). sonnet subjects:. usually about love, sonnets often are written about beauty but also about the

Sonnet - . sonnet writing for dummies . consists of:. fourteen lines it must be written in iambic pentameter

Sonnet - . brian lee. definition. the sonnet is one of the poetic forms that can be found in lyric poetry from europe. my

Sonnet - . what is a sonnet? sonnet - fourteen-line poem that follows a specified rhyme scheme purpose varies often to

Sonnet - . a sonnet is a 14 line poem. each line has ten-syllables and there is a definite end rhyme scheme. written in

Sonnet - . powerpoint by adam and josie. in poetry. originated from italy derives from the italian word sonetto which

Sonnet - . a poem with 14 lines in iambic pentameter divided into two, three, or four sections. follows a rhyming

The Sonnet - . the term sonnet is derived from the provençal word sonet and the italian word sonetto , both meaning

The Sonnet - . a 14-line poem about romantic love from the italian word for “little song”. a very structured form. 14

The Sonnet - . from the italian: “little song”. traditionally a love poem with 14 lines and strict rules of rhyme and