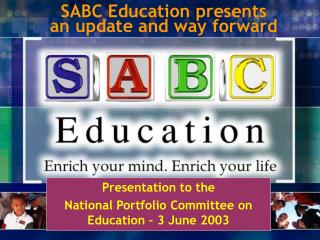 SABC Education presents an update and way forward. Presentation to the National Portfolio Committee on Education – 3 June 2003. Today Objectives. To continue the consultation process and sustain dialogue To highlight new initiatives and give feedback arivia.kom strategy and way forward Update - . 20 august 2003. what is arivia.kom?. an ict (1) solutions company with

Way Forward - . key aspects what constitutes a business combination? who is the acquirer? what is the date of

Way Forward - Remittance company commitments . comply with all relevant laws in the countries in which they choose to

WAY FORWARD - . improving crm practices in electricity sector. multiple challenges were identified from both supply and

Way forward - . this project development process driven by developers: you! so need to get commitment from a number of

Eurofiling – Way forward - . timelines from 2011 to 2013. data point structure for the streamlined corep and finrep

A Way Forward - . conversations about a way forward for the united methodist church. the mission of the