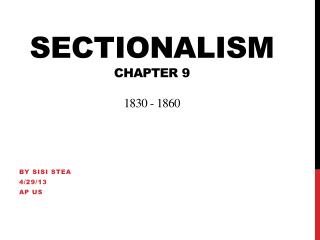 Sectionalism Chapter 9 1830 - 1860. BY Sisi Stea 4/29/13 AP US. Overarching Focus/Question. To what extent was sectionalism shaped by economic opportunity that then fueled regional conflicts?. The Northeast.

Chapter 9 - . applying population ecology: the human population and its impact. chapter overview questions. what is the

Sectionalism - . turn in assignment from yesterday!. daily focus what do these two pictures depict? in what ways do they

Sectionalism and Secession - . king cotton. factors that contributed to rise of cotton kingdom: demand from british

Chapter 9 - . the age of entrepreneurship: monopoly. figure 9.1 the average and marginal cost functions for our

Chapter 9 - . working for reform 1820-1860. objectives. describe the main characteristics of the mormons understand what Chapter 9 - . a national identity. entry task. sectionalism is defined as disagreements between different regions of the

Unity and Sectionalism - Growth and expansion:. unity and sectionalism. the era of good feelings. the absence of major

Chapter 9 - . creating graphs in illustrator. objectives. create a graph edit a graph using the graph data window use the

Sectionalism - . 4 major causes of the civil war. slavery - growing moral issue in the north vs. its defense and