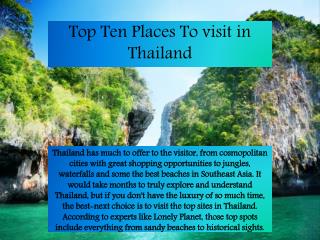 Top Ten Places to Visit in Australia - Australia is the one of the most popular country in world. every have the dream to

Thailand Places to Visit - Thailand a country that fascinates travelers from the various walks of life. with numerous

Attractive Places to visit in Thailand - Hereby, i usually tell you about the ancient and memorial places, for making up

Top Places To Visit In Florence - Florence is one of the most popular tourist destinations in europe. the city has many

Top places to visit in Kerala - Are you looking for kerala tour packages from mumbai ? well, then you are in the right

Top Places To Visit In Cochin - Explore an amazing destination of nature. cochin is a major tourist place of kerala.here

Top Places To Visit In Mumbai - The city mumbai, known as bombay until 1995, is an incredible port city, arranged on the

Top Places to Visit in Udaipur - If you are looking budget hotels in udaipur, hotel panna vilas is one of the luxuries

Places to Visit for New Year in Thailand - December is almost here and the new year is just around the corner. if you