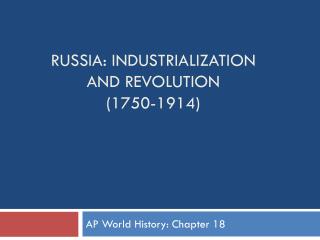 The Russian Revolution - . war and discontent nicholas ii was an autocratic ruler russia not prepared for war influence

UNIT 6 Industrialism and a New Global Age 1800-1914 - . life in the industrial age national triumphs in europe growth of

The Russian Revolution, 1917-1921 - . from the russian empire to the union of soviet socialist republics (ussr). imperial

Industrialization - . unit 9. i can. i dentify major eras and events in u.s. history such as the industrial revolution.