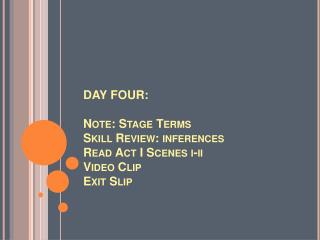 Terms Review I - . the pre-colonial and colonial eras. this was a series of wars fought in the middle ages by

Exit Slip - . how are the lessons? too fast? long? slow? boring? 2. how are you finding the pace of the course?

EXIT SLIP! - . mrs. whitesides took a survey of ten 6 th grade students during earth week. she asked each student how

Julius Caesar Act I and II Review - . 1. what literary element describes the two characters of cassius and brutus?. foil

Fences Act I, Scenes 2 and 3 - . discussion questions and answers. act i, scene 2. 1. what chore does troy want cory to

Romeo and Juliet Act I and II Review - . 1. a kind of meter or beat that shakespeare uses is called? . rhyme scheme

Unit 4 Video Clip Review - . click on any of the links below to view youtube video clips to help you prepare and review

Act I Scene i And Scene ii - . the plot so far…. two guardsmen and hamlet’s friend horatio see the ghost of