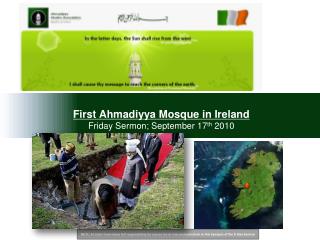 Ireland - . at the olympics vancouver 2010. ireland’s geography. irelands’ area is 27,135 square miles. some say that

Friday Sermon May 13 th 2011 - Status of prophethood of the promised messiah and divine promises of triumph. friday

The Mosque - Masjid - . the mosque - masjid. muslims believe that they are allowed to pray anywhere. so why do they need