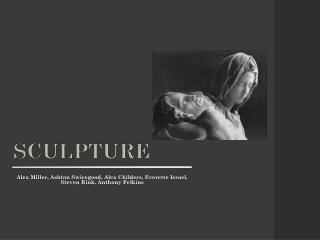 Sculpture - . element of art: form. there are two basic kinds of sculpture… sculpture in the round : freestanding

SCULPTURE - . sculpture:. art that is made to occupy space . it is 3d. 3-d three dimensional:. an object that has

Sculpture - . an introduction. definition of sculpture. a three-dimensional artwork created by shaping or combining

Sculpture - . http://www.slideshare.net/kccartprofessor/kcc-art-211-ch-11-sculpture-presentation. ceramics. one of the

Sculpture - . please take notes and make thumbnails in your sketchbook you will need to reference this information

Sculpture - . a new way of working from nature. sally matthews b.1964 in tamworth staffordshire. matthews is the daughter

Relief Sculpture - . “relief sculpture is any work which projects from, but which belongs to, a wall, or other type of

Monumental Sculpture - In the ancient city of mesopotamia as early as 4000 b.c the rich and intriguing history of bronze