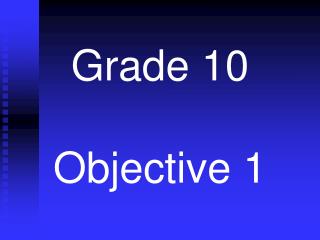 Grade 10 Objective 1. 1 All of these procedures should be followed for lab safety except — A immediately reporting all dangerous activity B wearing gloves when necessary C using eye protection as needed D putting used chemicals back in the original containers. Grade 10 Objective 2 - . 1 the illustration above shows a cell model with starch solutions both inside and outside the

Grade 10 Objective 3 - . 1 the diagram above represents a virus with its surface markers. the diagrams below show

Grade 11 Objective 1 - . 1 the safest way to dilute concentrated sulfuric acid is to add — a a series of small

1/10 Objective: - Students will be able to identify and analyze the reasons that the united states entered world war i.

10 th Grade TAKS - Released Tests - by Objective - . objective 1: the student will describe functional relationships in a

Grade 11 Objective 3 - . 1 viruses can only replicate — a inside a host cell b along a cellular membrane c outside

Grade 11 Objective 5 - . 1 during an investigation, students accelerated boxes using different forces and then

Objective 1 - . the student will demonstrate an understanding of the nature of science. scientific processes biology