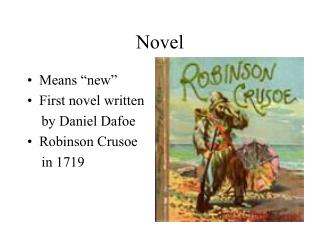 Novel. Means “new” First novel written by Daniel Dafoe Robinson Crusoe in 1719. Elements of a Novel. Setting : The time, place and environment in which a story takes place Plot : The series of events in a story that reveal the conflict, crisis and resolution Novel: - . the word novel is used in the broadest sense to name any extended fictional narrative almost always in prose.

Novel teams - . mrs. kelly brown the outsiders by s.e. hinton. what do we do each day?. 1. everyone gets a book and opens

Choice Novel - . to read or not to read, the choice is not yours!  due date tbd…. assignment:. as you read, you are

Novel Study - . the river. chapter summaries. over the next few weeks, we will be listening to “the river” - gary