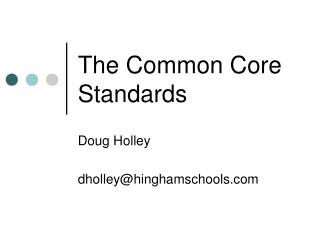 Getting Ready For the Common Core..And What You Need to Know About Writing - . agenda: common core self assessment why

Understanding The Common Core - . an overview of the reasons, the structure, and the parcc. agenda. why do we have the

What is Common Core? - . moving forward in washington with the common core state standards. www.readywa.org . what is