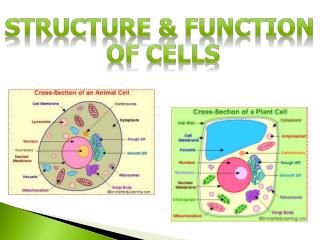 Structure & Function of Cells. Cell Wall Strong, stiff outer layer of a plant cell. Made of cellulose. Protects and supports the cell. Does allow water, oxygen, carbon dioxide and other dissolved materials to pass in and out of the cell. Cell wall. Cell Membrane A Theoretical Investigation of the Structure and Function of MAO (Methylaluminoxane) - . eva zurek, university of

“Take Two and Call Me in the Morning” A Case Study in Cell Structure and Function - . by peggy brickman university of

SIGNAL TRANSDUCTION - . dr amina tariq biochemistry. cell-cell interactions. for a coordinated function of cells in a