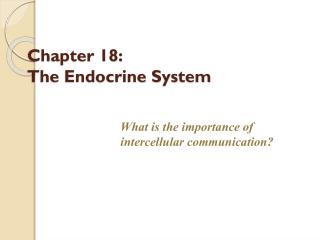 CHAPTER 9 Ignition System Diagnosis and Service - . objectives. after studying chapter 9, the reader will be able to:

Assessment and Management of Patients with Endocrine Disorders - . by linda self. glands of the endocrine system.

Chapter 14 Endocrine System - . introduction. the endocrine system and the nervous system are the two major communicating

The autonomic nervous system - . controls smooth muscles, exocrine and some endocrine secretions, rate and force of the