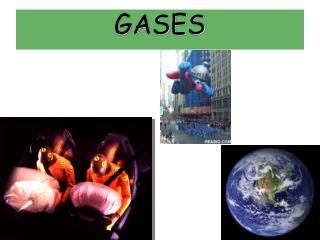 GASES. Importance of Gases. Airbags fill with N 2 gas in an accident. Gas is generated by the decomposition of sodium azide, NaN 3 . 2 NaN 3  2 Na + 3 N 2 The air we breathe. THREE STATES OF MATTER. General Properties of Gases. There is a lot of “free” space in a gas.