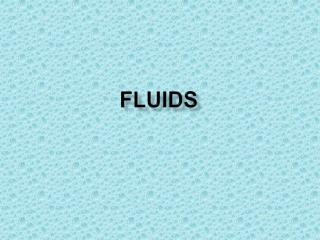 fluids. Fluids. A fluid is a substance that has: no definite form Is able to flow in all directions All liquids and gases are fluids The body is full of fluids- gas and liquid. Fluids. Powders such as sugar, flour or sand are not fluids even though they have no form and flow Fluids - . chapter 11. why does something float?. 11.1 mass density. in this chapter, we discuss the behavior of fluids.

Fluids - . static fluids bernoulli’s equation fluids. are you here?. yes no. did you attempt any questions on the

Fluids - . particles are free to move past each other gases and liquids. archimedes. eureka! . why do things feel lighter

Fluids - . a note on usage:. the clicker slides in this booklet are meant to be used as stimuli to encourage class

Fluids - . your comments. everything is going great. it seems like there is homework due and we haven’t gone over any

FLUIDS - . archimedes’ principle pascal’s principle bernoulli’s principle. what is a fluid?. a substance that flows

Fluids - . density. ρ (rho), mass, and volume density and specific gravity. the density of iron is greater than that of

Fluids - . honors physics. liquids. in a liquid, molecules flow freely from position to position by sliding over each