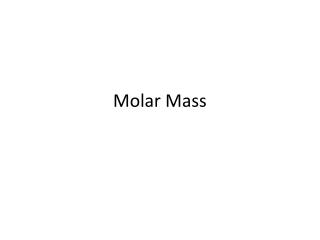 Molar Mass. Molecular Mass. The molecular mass of a substance is the mass in atomic mass units ( amu ) of all the atoms in a given molecule. It is more commonly referred to as molecular weight and abbreviated as MW. Molar Mass - . using molar mass as a conversion factor. molar mass. a molar mass is the mass in grams of one mole of a

Calculating Molar Mass - . on the periodic table, the atomic mass given is the mass (in grams) of one mole of that atom.

Calculating Molar Mass - . on the periodic table, the atmoic mass given is the mass (in grams) of one mole of that atom.

Molar Moler Mass - . as is common in science, animal testing is the way to go. let’s meet our mole family that will

Gram Formula Mass (Molar Mass) - . unit 6 - bonding. gram formula mass. how many atoms of each element are in a formula

Determination of Molar Mass - . use freezing point depression to determine the molality of a solution, which is then used

The Mole Molar Mass - . defining the mole. atoms are small so there are a lot of them present in samples we use on our