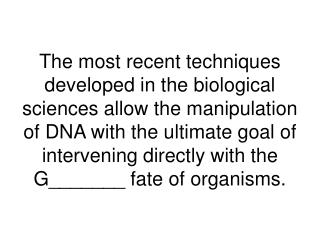 The most recent techniques developed in the biological sciences allow the manipulation of DNA with the ultimate goal of intervening directly with the G_______ fate of organisms. Enzymes that cleave DNA at specific sites are called ________ _________. Glaciation and the Pleistocene - . over the last two million years, severe climatic changes had tremendous influence on

Chapter 6 Biological Oxidation - . the biochemistry and molecular biology department of cmu. biological oxidation is the

SAMPLING FOR CONTAMINANTS - . of biological origin. presented by. mold in the news!. biological contaminants. defining

Biological Factors - . important questions why are biological factors important? under which conditions is a person most

Biological Control - Historical background what is biological control principles examples. “if you want milk with