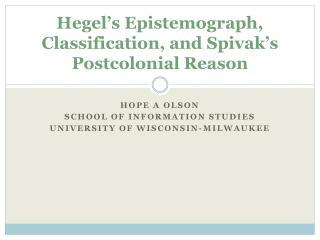 Hegel’s Epistemograph , Classification, and Spivak’s Postcolonial Reason. Hope A Olson School of information studies University of Wisconsin-Milwaukee. Concepts. Teleology – linear progression toward a goal Epistemograph , “a graduated diagram of the coming-into-being of knowledge, …” DIVISION or CLASSIFICATION ESSAY - . prewriting. prewriting. decide upon which side of the coin you will focus. that is,

THE AGE OF SCIENCE AND REASON - . this is provable using mathematics and science. physical law. a period of new

Text Classification and Na ï ve Bayes - . the task of text classification. is this spam?. who wrote which federalist

Topic 1: Classification - . classification history. taxonomy : branch of biology that groups all life according to their

Lecture 3-4: Classification &amp; Clustering - . both operate a partitioning of the parameter space . clustering: