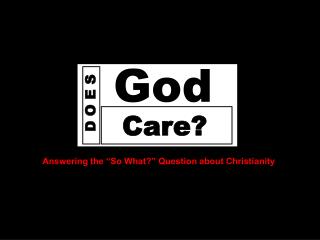 D o e s. God. D O E S . Care?. Answering the “So What?” Question about Christianity. Does God Care about Me?. What is Deism? . Deism is the belief that a single God created the universe, but asserts that He is not active in His creation nor cares about it.