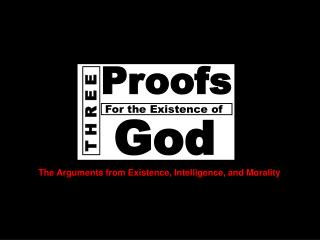 God. D o e s. Proofs. For the Existence of. T H R E E. God. The Arguments from Existence, Intelligence, and Morality. Two Rational Choices for Why We are Here. Natural Cause – there is nothing outside of this impersonal universe, which accidently brought forth mankind. .