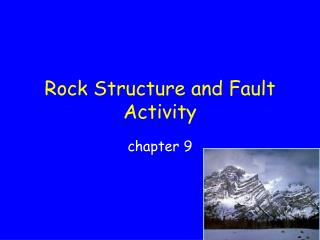 Rock Structure and Fault Activity. chapter 9. What is structural geology. The study of the forms of the Earth’s crust and the processes which have shaped it analysis of displacement and changes in shape of rock bodies (strain) reconstruct stress that produced strain. Structural Deformation. Activity Structure - . introduction to writing activities if you have recently completed the watersheds activity and have

Structure of the Earth and the Rock Cycle - . lithosphere composed of minerals. definition of “ mineral” ?. silicate