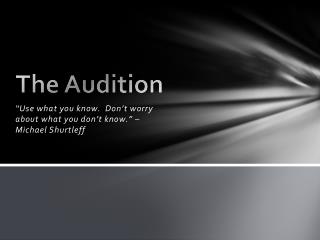 The Audition . “Use what you know. Don’t worry about what you don’t know.” – Michael Shurtleff. Vocabulary. Casting : The director’s process of matching up characters and actors. Acting Audition: Looking the Part in Your Audition - The key to dressing the part is to do so subtly. you want to pay