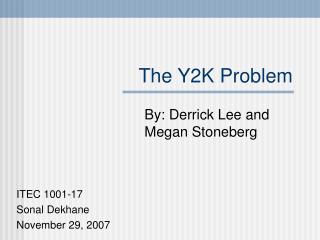 The Y2K Problem. By: Derrick Lee and Megan Stoneberg. ITEC 1001-17 Sonal Dekhane November 29, 2007. Year 2000 Problem. “Never before in history have we been able to predict the date of a catastrophe…until now.” - Y2K Web site. Areas of Focus. Name Overview Programming The Y2K Bug The Y2K Scare - Michael kloss. the y2k scare. what it is scams preperations outcome “scary world”. what’s ahead.

What was the Y2K Bug? - . parker schroeder and andrew melville. background. referred to many names such as year 2000

Y tu, que? (Y2K) - . --”…entire class was focused on the similarities and differences between the present-day status

Y2K LESSONS LEARNED: REPORT ON A CONFERENCE - . stuart umpleby the george washington university. overview (1). who was at