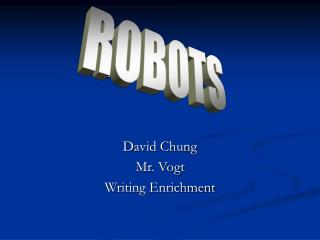 ROBOTS. ROBOTS. David Chung Mr. Vogt Writing Enrichment. What IS a Robot?. “ A mechanical device that sometimes resembles a human and is capable of performing a variety of often complex human tasks on command or by being programmed in advance. ” Any artificial being that’s able to perform