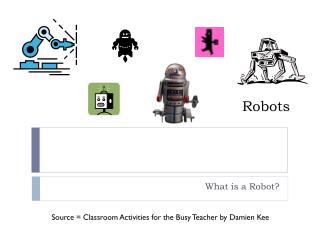 Robots. What is a Robot?. Source = Classroom Activities for the Busy Teacher by Damien Kee. Q & A. What is a robot? Where did the term ‘robot’ come from? Name some types of robots. Why do we have robots / what function do they perform in society? What are the main components of a robot?.