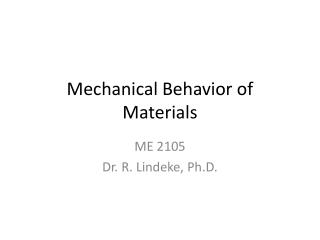 Mechanical Behavior of Materials. ME 2105 Dr. R. Lindeke, Ph.D. Chapter 6: Behavior Of Material Under Mechanical Loads = Mechanical Properties. Stress and strain : What are they and why are they used instead of load and deformation Elastic behavior: MECHANICAL PROPERTIES OF MATERIALS - . thursday, 3 march 2005. mechanical properties and testing of materials. the

Mechanical properties of materials - . by dr. reham mohammed abdallah. items to be covered introduction on mechanical