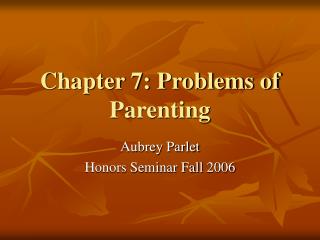 Chapter 7: Problems of Parenting. Aubrey Parlet Honors Seminar Fall 2006. How would you define “Offspring”?. Introduction. 1. They are a genetic vehicle for their parents. 2. They are the means by which their parents’ genes may get transported to succeeding generations. . 10 Ingenious and Clever Summer Parenting Hacks You Need To Know - Take a vacation from irritation.try these awesome

Chapter 19 : Recursion - . objectives. after studying this chapter you should understand the following: recursion, and

Parenting 101 - . finally, a manual just for new parents! from burping &amp; bathing, to choosing the perfect

Nurturing Parenting Programs® - . evidence-based programs for the prevention and treatment of child abuse and neglect.