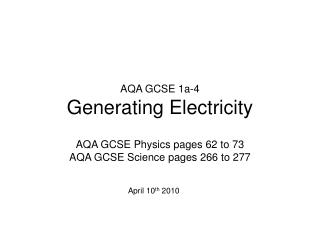 AQA GCSE - . creative writing. the ao criteria. at the end of the unit you will be assessed on: ao4 writing write to

GCSE AQA Graphics - . making and making log. things to note. make in this order: board cards counters box use the help

Generating Electricity - . what is energy?. energy has many different forms . when an object is able to change its

Generating Electricity - . 1831 michael faraday discovers that by moving a magnetic bar near a loop of wire, an electric