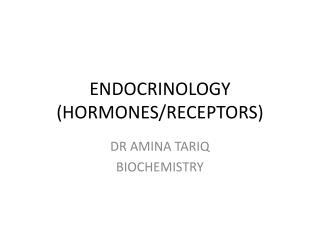 ENDOCRINOLOGY (HORMONES/RECEPTORS). DR AMINA TARIQ BIOCHEMISTRY. Cell-Cell Interactions . For a coordinated function of cells in a tissue, tissues in an organ, organs in a system and systems in the body, cells need to be able to communicate with each other.

Endocrine Systematics - . barrett peters biomedical research. function and format. made up of all glands and hormones of

Endocrinology... The Study of Hormones - Today's warm-up: name one thing you think hormones are responsible for doing in

The Endocrine System - . overview of the endocrine system. system of ductless glands that secrete hormones hormones are