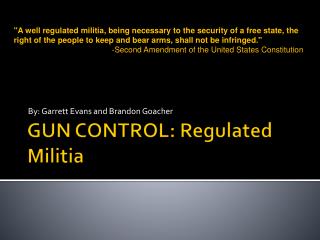 "A well regulated militia, being necessary to the security of a free state, the right of the people to keep and bear arms, shall not be infringed." -Second Amendment of the United States Constitution. By: Garrett Evans and Brandon Goacher. GUN CONTROL: Regulated Militia. What is gun control?. Polish militia volunteers surge - Inspired by the war in ukraine, a growing number of poles are joining volunteer

Signaling Pathways that Depend on Regulated Proteolysis - . 7 may 2007. identified through genetic studies in drosophila.

BALLISTICS and FIREARMS - . “ a well regulated militia, being necessary to the security of a free state, the right of

Gun Control - . should the u.s. government ban the possession of handguns for normal citizens? . public opinion is

Gun Control - . by: austin goss. thesis statement. my powerpoint is about the situation of gun control. is gun control