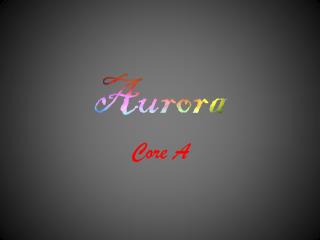 Aurora. Core A. Preliminary Question. Are there color differences between the Northern Lights and Southern Lights when viewed from space, and have they changed over time?. Aurora. AURORA - . a erial u nmanned r econnaissance and o perations r esearch a ircraft. overview – what, why, and how….

Aurora - . thales theory. the activity is based on the theory of the greek mathematician thales. thales is famous for his