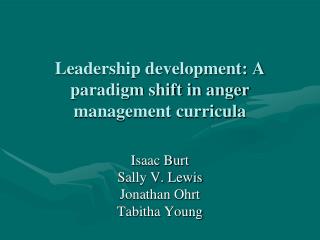 Toward Human Level Machine Intelligence—Is it Achievable? The Need for A Paradigm Shift - Lotfi a. zadeh computer

The Six Shifts - . what are some practices that will have to shift in order to meet the spirit and intent of the new york

Subject : Anger Management Information : From the book “The Other Side Of Love” by Dr. Gary Chapman Class : AFJROTC

MODULE 16 LEADERSHIP - . “a leader lives in each of us” . what are the foundations for effective leadership? what are

Philippine Private Education: Towards a New Paradigm - . e-3 seminar victor ordonez antipolo, rizal may, 2002. towards a