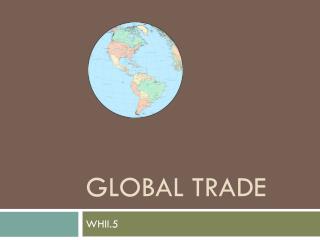 Global Trade. WHII.5. Standard WHII.5. You will be able to describe… and located the Ottoman Empire India, coastal trade, and the Mughal Empire East Asia, including China & Japanese shogunate Africa and its global trade involvment Global trade - Trading globally allow consumers and countries the chance to be exposed to new market hub and products.

Global trade - . what: an overview of contemporary global networks and flows: why: how different  places  become

Global Trade Limited - Is here. get wholesale soft drinks online and we'll make sure it reaches your door on

Dilemmas of Global Trade - Problem solving. dilemmas of global trade. directions. answer yes or no to each of the