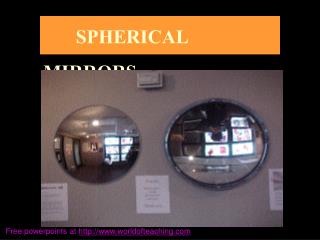 SPHERICAL MIRRORS. Free powerpoints at http://www.worldofteaching.com. What is a spherical mirror?. Spherical mirrors are mirrors whose surfaces form a part of a hollow sphere, The spheres can be made of glass or any polished metal surfaces. Types of spherical mirrors :. Spherical Mirrors - . spherical mirror – a section of a sphere of radius r and with a center of curvature c. r. c.

25.4: Spherical Mirrors - . concave mirror. light rays near and parallel to the principal axis are reflected from a

Concave Spherical Mirrors - . what are they?. parts. radius of curvature-a measure of the radius of the circular arc.

25.4: Spherical Mirrors - . concave mirror. light rays near and parallel to the principal axis are reflected from a

Formation of Images by Spherical Mirrors - . for an object infinitely far away (the sun or starts), the rays would be

Mirrors - . mirror – a shiny object that reflects light instead of letting the light go through. specular reflections.

Mirrors - . general body meeting 1/16/14. spring semester breakdown. will be sent out in the email with the minutes and

Mirrors - . general body meeting 8/28/13. thank you!. huge thanks to everyone who helped set up and staff the

Mirrors - . recall: images formed by curved mirrors depend on position of image images could be: real or virtual

mirrors - α Ø Ф. average angle under the mirror of the cantilever to the horizontal angle of the mounted mirrors

Mirrors - . vahak bairamian ap english mrs. halajian january 2008. what are mirrors?. a mirror is an object with a