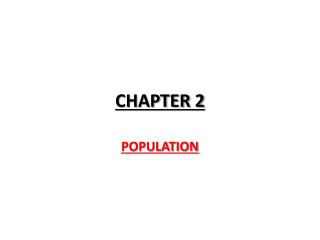 CHAPTER 2. POPULATION. WHY IS POPULATION IMPORTANT?. Helps explain issues in human geography It’s connected to everything!!!! (economics, health, politics….). CASE STUDY: INDIA. Read the case study on p. 46 and answer the following: Give 2 reasons people in India are having many children

Honest Work: Chapter 2 on Deception - I discuss the readers in chapter 2: pp.