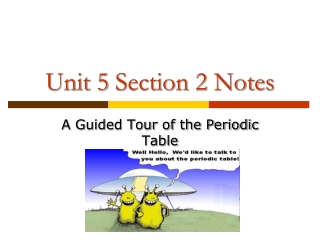 Unit 5 Section 2 Notes. A Guided Tour of the Periodic Table. Who is Dmitri Mendeleev? (1834-1907). In 1869 , Dmitri Ivanovitch Mendeléev created the first accepted version of the periodic table. What is the Periodic Table?. Shows all known elements in the universe SUPPORTING NOTES FOR PRACTICAL UNIT - . “in addition to presenting the extract (s) from their selected play, the

Unit 5: General Staff Functions - . unit objective. describe the roles and functions of the general staff including:

Unit 1: The Founding of the Nation - . agenda: tuesday 8/14/12. homework reminder hot roc-why do we study history?