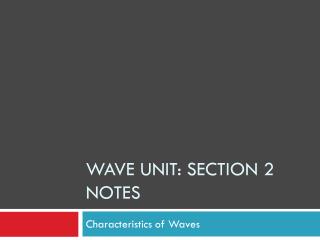 Wave unit: Section 2 Notes. Characteristics of Waves. Transverse Waves:. An ideal transverse wave has the shape of a sine curve and looks like an “ S ” lying on its side. The simplest transverse waves have similar shapes no matter how big they are or what medium they travel through.