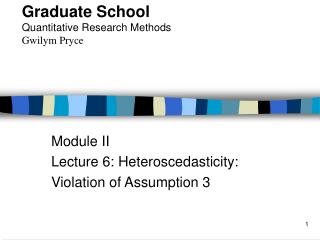 Interpretations of prose and poetry - . learning outcome: by the end of the lesson we will be able to discuss the

25. Which of the following might be considered a violation of employees’ privacy in the workplace? - . a. use of

405 ECONOMETRICS - Chapter # 11 : heteroscedasticity: what happens if the error variance is nonconstant? by domodar n.

AOV Assumption Checking and Transformations ( § 8.4, 8.5) - . how do we check the normality assumption in aov? how do we