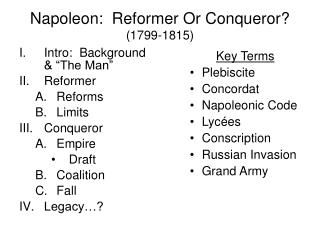 Objectives - . explain the rise of napoleon after robespierre. evaluate the importance of napoleon’s reforms. napoleon

The Age of Napoleon - . 18.4. napoleon’s rise to power. born in corsica popular military hero during the revolution

The Arts in the Age of Napoleon 1800-1815 - . the objective of this slide show is to familiarize yourself with the art of

THE CONCORDAT OF 1801 - . napoleon was not personally religious he used religion to suit his own purposes he was really