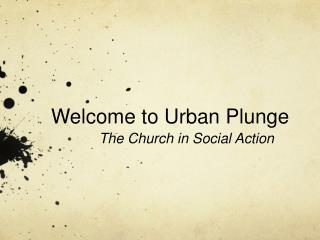 Welcome to Urban Plunge. The Church in Social Action. Introductions:. Who are you? Who are we? What is this all about?. Goals of Urban Plunge. Learn more about the current realities of urban poverty and communities affected Welcome To The 2014 Polar Plunge Team - . ancient order of hibernians patrick torphy division. who is the aoh?. oldest

Welcome To The Urban Knot - India wears her beauty in the colorful textiles, breathtaking ornaments and inspiring stories

Taking the plunge, migrating to LINUX - . john peters jrpjr, inc. john.peters@jrpjr.com. before we start a quick

Welcome to The Meyer Center for Urban Ministries - . dear participants. please help us take care of our facility by