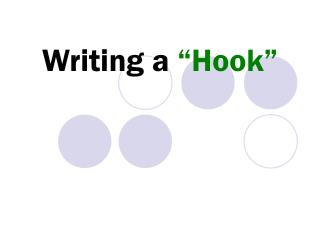 Writing a “Hook”. Q – QUESTION Q – QUOTATION A – ANECDOTE S – STATEMENT. Ask a provocative question to capture your reader’s interest. “Quote” a popular phrase or proverb. A brief, three to five sentence story can be an amazing opening.

WRITING FOR THE WEB - . make your web content easier to find and understand by your audience. contents.