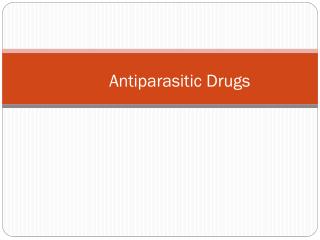 Antiparasitic Drugs. Parasitic infections afflict a huge number of people with increasing prevalence for some, yet we really don’t invest a lot in them. More than 1/3 of the world’s population is infected with a parasite, including 1 in 5 Americans. . Evolution matters: Chloroplasts as targets for antiparasitic drugs - . reviewing grants – what happens after your