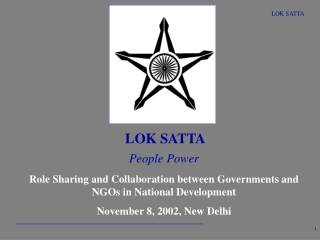 LOK SATTA. People Power. Role Sharing and Collaboration between Governments and NGOs in National Development November 8, 2002, New Delhi. “Never doubt that a group of thoughtful, committed individuals can change the world. Indeed it is the only thing that ever did” Margaret Mead.