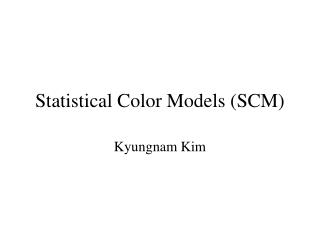 Color Models - . what is color. - color is a powerful descriptor that often simplifies object identification and

Statistical Inventory Models - . newsperson model: single order in the face of uncertain demand no replenishment base

Linear Statistical Models - . answering the questions you have asked. are these ratings really different? what is the

Statistical Shape Models - . eigenpatches model regions assume shape is fixed what if it isn’t? faces with