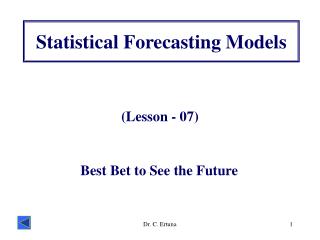 Forecasting Models - . ie 3265 r. lindeke. introduction to forecasting. what is forecasting? primary function is to

Statistical Inventory Models - . newsperson model: single order in the face of uncertain demand no replenishment base

Linear Statistical Models - . answering the questions you have asked. are these ratings really different? what is the

Statistical Shape Models - . eigenpatches model regions assume shape is fixed what if it isn’t? faces with

Forecasting using ARIMA-models - . step 1. assess the stationarity of the given time series of data and form differences